We bought a 2004 Volkswagen Passat from Kali and had a great experience throughout the entire process! Before visiting Tripoli, we found a couple of cars online that we were interested in; however, as another reviewer mentioned, make sure you call first, because they had already sold those cars, but hadnt taken them down off the website yet. Fortunately, we found another Passat that was just as nice and in the same price range, but that doesnt always happen. From the moment we stepped into the dealership, Kali and Joel were very welcoming and interested in helping us. The dealership isnt fancy, which is nice, because it means they arent charging more for the cars and using the money to fix up their business. After finding the Passat we were interested in, we test drove it and then took it to our mechanic. Besides needing some regularly scheduled maintenance, our mechanic told us we needed to have gaskets on the engine changed and that it would need a starter within the year. Our mechanic said that if they work with us on these two items to buy the car immediately! For the price, he said it was a fantastic deal! When we went back to talk with Kali, he said that they would put in the new gaskets before we left and replace the starter free of charge if it went out within a year. Before we bought the car, Kali gave us the CarFax, so we were able to make sure the car didnt have a salvage title. It also provides the exact maintenance records, so we wont have to guess as to when to replace parts and spend extra money. Weve had the car now for almost two months and have had zero surprises thus far! For the people not satisfied with Tripoli, make sure that you always have a trusted mechanic completely check out ANY used car BEFORE you buy it. Many mechanics wont charge you for the inspection because they want your business and believe you will bring them the car when you need it fixed. Overall, weve had a wonderful experience at Tripoli! We worked mainly with Kali, but also spoke with Joel and the owner as well. Each person treated us with respect and dignity. If you need a vehicle and dont have a lot of money to spend, try Tripoli!!

First off, if I could give this company 0 or negative stars I would. They are unethical, rude, and unprofessional in every way shape and form. I bought my first car from this company and could not be any more displeased with both the customer service and quality of the vehicle I purchased. PLEASE BE WARNED this company is unethical, unprofessional, and lies to you. I bought the car two months ago and they covered up a mechanical failure that is keeping the car from passing emissions. They knowingly sold me a car that does not pass health and safety standards and instead of admitting to it they covered up the problem just long enough for them not to be responsible for any repairs to the vehicle. Not only that but they fix up all of the cars themselves, write false reports and lie about the quality of the car they are trying to sell you. Oh and I did not even get an emissions voucher which apparently every single other car dealership gives to a person when they purchase a vehicle. THESE GUYS DO NOT KNOW WHAT THEY ARE DOING WHAT SO EVER. All in all this company is not only a headache to deal, they rarely have regular business hours, never answer the phone, and have extremely poor customer interaction. They are very pushy are rude and throw everything on you. THEY DO NOT CARE ABOUT THE CUSTOMER ONLY THE MONEY THE CUSTOMER HAS TO OFFER THEM. Once you purchase the vehicle it will most likely have some hidden problems and once you find them, this company will not help in any way shape or form, nor will they care that they just stabbed a nice hardworking individual in the back.

I purchased my VW Passat at Tripoli Auto for an affordable deal, and it was the BEST car buying experience I have ever had. Every single staff member was incredibly friendly. One even gave me couch buying tips, while another offered my daughter cookies to help her be patient. Most notably, Kaly went above and beyond to make sure I was 110% satisfied. As expected from older vehicles, there were initially some mechanical issues after my purchase, but even though the vehicle was sold “as-is” without any warranty, they took care of EVERYTHING for me!!! (Note: The vehicle passed emissions with no problem, even before the additional complimentary repairs.) Weeks later, I ran into an issue with an AC drainage leak. Not only did they fix this too, but they even did extra cosmetic repairs for free!!! I ran out of time to pick up my vehicle during business hours, but Kaly met with me after hours, on a Sunday no less, so that I wouldnt be inconvenienced. I am so grateful for all the kindness he and the rest of the staff have shown me. It is truly a special place, and I HIGHLY recommend Tripoli Auto. :D

We worked with Joel and we liked his honesty so much, we ended up buying 2 cars from him. We are still having an issue getting some things corrected with a Check Engine light on one of them (which they said they would correct), but Joel has been working with us to get this fixed. Once this gets completed as promised, I will increase their rating. Unfortunately, I have to decrease my rating. The check engine light never did get fixed. Also, they had kept the car for a week and told me that a part was replaced. However, when I took the car to a mechanic to diagnose the check engine light, they informed me that this same part was never replaced and was old and dirty. I tried to call back to get the receipt for the original part (so that I could maybe get a new one via warrantee), but I never got a return call. I am so disappointed with Tripoli, after I had thought that we might have found a respectable place to do business. Very disappointing...

These people are friendly, understanding, flexible, and extremely co-operative. The cars are good and also have affordable and reasonable rates. I walked in to take a look at a car I saw online and met Kaly. The car was good but wasnt exactly what I was looking for. Kaly asked me what kind of budget I had and suggested me a car. After taking a good look at it and taking it for a drive I didnt need to look for anything else. It was perfect for me. Since it was a used car, 2001 model, it did have a few minor issues but Kaly responsibly got all of them fixed and I got the car in perfect shape. Being new to the country I knew almost nothing about the buying process but Kaly patiently helped me get through everything within the small time frame I had and ensured that everything went right. I would highly recommend Tripoli Auto Sales to anyone. Thank you for a wonderful experience and an awesome car.

My father, in his eighties, purchased a car from this establishment without being told it had been in a total collision and carries a salvage title. The auto-body work was reconditioned carefully and it was was priced $4,000 less than its Kelly Blue book value. However, my father learned after attempting to trade-up the car it has no more value than $2,000, considering the internal damage it suffered. My father was defrauded by this establishment and now I have to file a formal complaint, on his behalf, with the Colorado Department of Revenue. If you visit this establishment, make sure you check the carfacts online before making any purchases because they wont honestly tell the history of the lemons they intend to push on you. 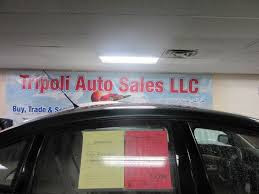 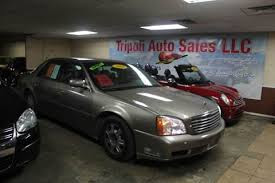 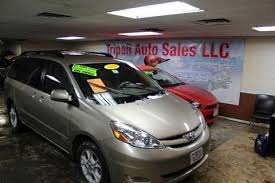