I must tell you that I am VERY disappointed with Napleton Mazda Libertyville. First of all, I started contact by using the Costco Auto service (have used it before, it was awesome). I was contacted by Mazda and as I asked more questions, my contact suddenly stopped. I had to ask the manager why and suddenly, days later the contact restarted. I was provided a price for the Mazda6 I Grand Touring. Very good price! I asked my local dealer who advised me to take that deal. I was skeptical about the price provided so I resubmitted my request for this car and another price was provided by a different representative. This price was within $12 of the first price. I didn’t want the color quoted so I asked if they have the blue or the red in stock for that price. I was told they do indeed have those colors. Due to the excellent deal being offered, I made an appointment and drove 2.5-hours. Upon arrival, much to my surprise, they did not have this car in either the blue or the red! Hmm, starting to feel like this dealership is just saying whatever they need to get someone in the door. So, the manager was going to make it good because the colors were not as promised. He then showed me a really "good" deal that is only $6,500 more than promised on the Costco price. So, I showed him the email and price I was quoted. He said they made a mistake and "someone is going to be fired over this". Here is the problem, like I said, I was skeptical and asked for a second price. The new price came back same as old one. Hmm, was it a mistake? Or, is this just a sleazy tool the dealership uses to get people wanting a car through the door? Between the drive and my time in the dealership, I spent 6.5 hours on this venture that I suspect it was not a mistake.

I stopped into Napleton Mazda in Libertyville after shopping for, in my opinion, way too long. Id dealt with a bunch of shady old guys all day looking to replace my civic and not a single one of them wanted anything to do with me other than to take my money. I left half-way through the process of looking most of the time because these guys were plain old boring! And falling asleep on a test drive doesnt tickle my fancy. So, tired and just wanting to be able to tell my boyfriend Id put in the time, I made my last stop at napleton Mazda. Right away, the salesman was something I hadnt seen all day. He was probably my age, and he was actually dressed like he cared about his job. Immediately you could tell this guy was excited about talking to me. And not in a creepy way, just excited to be able to show me some cars! Sean OKeefe was a breath of fresh air, and definitely impressed. The conversation never died out, and when it was time for business he was very professional. But when we were driving, or just in between tasks, he had a joke ready for every occasion. It took me a minute to get the humor, very dry, but once I caught on the two of us hit it off! Ill be back next time to see him again. Hopefully in the span of the next few years of my Mazda3 lease he doesnt lose any of that youthful energy! Thanks for making it so I went home happy Sean, and for making Napleton Mazda in Libertyville somewhere fun and easy to shop!

Having read an exceptionally good review of the CX5 I decided to stop in at the dealership to see what the vehicle actually looked like. About four hours later I drove home in this remarkable SUV. For two days I was in shock over what I had done and then I was in love. Ben Bensky was the very understanding and patient salesman who answered all my questions and became my instructor on how to deal with all the wonderful things this car will do. Just sitting in this car feels like being in a comfortable and protective nest. I used to have a lead foot but now I so enjoy the ride that Im not so anxious to arrive at my destination. I also must mention how helpful I found Jeff Becknell to be when I had a very minor problem that he fixed very quickly. Also I had driven in with a filthy car from driving through muddy roads and I left with a shiny clean vehicle. As you can see I am one very satisfied customer.

I couldnt love this dealership more! Where else can you find a car dealership that goes so far beyond selling or leasing you a new car that they feel like family? Seriously! I not only worked with Peter to find the perfect car for my needs, but their finance manager, Scott, crossed every "t" dotted every "i" and made the whole financing process smooth as butter. When my phone was stolen and they needed to reach me to adjust my payment (money back!), he went the extra mile to contact me. The manager, Elmer, takes care of me like my father would when I come in. I own and lease multiple vehicles and its not often I would say that I "trust these guys implicitly," but I truly do. Its a delight leasing from Libertyville Mazda and well worth the drive out there from the city. My best advice to you, especially the women out there who are leery of car dealerships is "dont go anywhere else!"

My husband and I were looking for a used vehicle and just driving up and down the strip looking at different dealers. We pulled into the Mazda store and were greeted by Marcin at the door. He is actually the General Manager there but was extremely friendly and personally took care of us the whole time. He had a salesman show us the perfect used car and gave us a price that we couldnt walk away from. I am definitely happy that we ended up at this dealer. They have really nice used cars that they take a lot of pride in, obviously. We saw a lot of other used cars that day and most dealers do not have very nice ones. Theirs are almost like new even the ones that are several years old! We were so happy with our whole experience.

The was such an easy purchase and these folks are fantastic to work with. They gave me their deal (all the numbers) and didnt try to pressure me. I told them I was still shopping brands and I was on my way without the usual games so many dealers still play. After shopping other SUVs, the Mazda CX-9 was easily far above the competition. I went back, bought the vehicle, and the entire process took less than an hour – even with a trade. Fantastic deal, none of the usual tactics, and super quick purchase. I’d do six stars if I could. Also, if you’re shopping for an SUV, the 2017 CX-9 must be on your list. It blows away anything else on the market – even up to the BMW X5.

Ryan Kennedy was the most helpful person Ive spoken with on the phone in recent times. My fiance and I made our way into the store to take a look at a CX-9 that was online. When we got there Ryan came down and said hello, then directed us to one of the Sales reps, Sean OKeefe. Turns out theyre roommates! Sean was a blast to work with today, and we will be back to buy the cx-9 as soon as our insurance settles. The two of them are great, you can tell theyve known each other for a long while and they work really well together. The manager, Les, even mixed them up a couple times when he was talking to either or. Truly good work from Napleton Mazda! 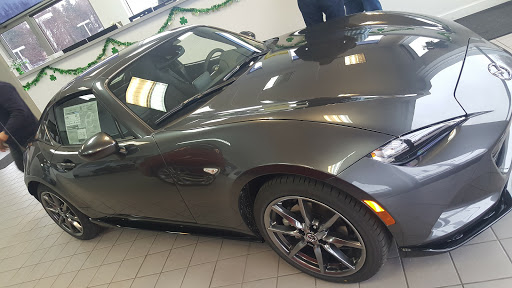 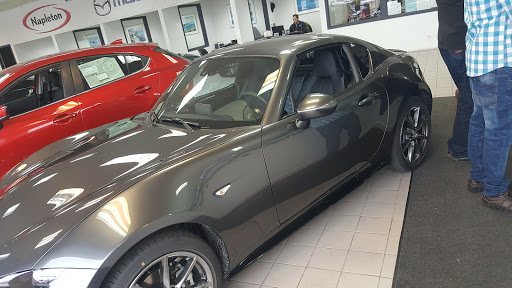