I leased a car from here a few months ago and in the beginning everything was great. The day I bought the car the owners were very friendly and helpful. Then a few weeks later I experienced my car being shut off because of the kill switch. I had no idea one had been placed on my car and didnt understand why it had been triggered if I was making my payments each week on a Wednesday. When i called I was transfered to the owner who was very rude and nasty "YOU ARE LATE I DONT HAVE TO LISTEN TO YOU IF YOU ARE LATE I SHUT THE CAR OFF!" Which was very uncalled for because I was new to this system and simply did not understand the payment schedule. The problem persisted every following week since and I was constantly getting stranded and late to work due to this.One time I was stranded at a park at approx. 6:30 and called about 20 times and got no answer even though they supposedly close at 7pm. After several incidents I explained to the owners wife that I get paid on Wednesdays and do not see an issue if I am making payments weekly, she told me she would notate it to my account and that it would never happen again. The next day, it happened again and I called only for her to tell me that the loan company "does not care if i get paid on wednesday they expect payment on friday." Which would have been fine if she didnt lie all those other times and pretend she was notating the payment schedule to my account. All in all this place is VERY unprofessional to the point where ive sought legal advice and I am completely dissatisfied with getting my first car from here but am continuing to make payments weekly so I can eventually trade the car in and not have to deal with this trailer trash company anymore.

These people dont care about quality of business they will give you all the righ answers on the phone just to get you in the door. When I called they gave me a price for a 335i. Told them I was going to come see it that night and they told me no problem and they will see me later that day. When I arrived the guy I originally spoke with wasnt there anymore. The car I called about they sold already. Now Im not upset they sold the car I understand that business is business. But when I arrived they then quoated me a 328 with the same amount of mileage but not was asking for 3 grand more. Mind you its a lower model and his reason was that its a year newer. Then they quoated me another 335 and also wanted more money even though it had 20k more miles than the original one I was inquiring about. Very unprofessional and dont see them to be people who keep their word or are even honest people. Stay away and I deff wont consider purchasing from them.

my experience with this company have been pretty good, they are honest and do what they promise, I was shut down but it was my own fault, my payment is due ever Friday and I miss it and on Wednesday morning my car didnt start so I called in and made the late payment and since then I have been on time so I guess I learned by the experience that I have to make my payments in a timely fashion and I havent had any problems, I tried to finance a car at an other dealer and they wanted about 30% down and yet empire just wanted $500 + taxes, I think they are OK!

the below rating was left by a customer named paul who fell behind 2 payments and was repossed. This however had nothing to do with the $1600 deposit he took from empire auto sale to do security camera work a month ago and was never heard from again. he fell behind in payments due to him ducking empire after stealing $1600 of services that was never rendered. Even thou you stole money you were repossed for late payments dumbass!!!!!!!! and yes u only owed $600 stupid time to fall behind. dont worry we can also leave a rating for your company as well .

customer service was great. I financed a car from them in March 2017 after having trouble with another dealership down the road. the car had low mileage and has been great to me since. service was fast and efficient. "Red" was awesome and gave me a great deal on a 2013 Nissan rogue. Amazing service!

Got a 2001 Honda civic from them on 2/22/10 the car is trash falling a part only last me 4 months Had to change the belts needed both control arm fix needed a new gaskit cause oil was coming out from the side they sell juke cars dont go and dont be fool by the old man.

Steve was Amazing! He got my fiancé and I into an exceptional vehicle that runs smoothly and has good interior and exterior. I look forward to continuing to work w/ the team at Adams for future car purchases. Thanks!

I wouldnt recommend going here they sold me a crappy car with all sorts of problems , and my uncle is a veteran and they took advantage of his disability co signing for me and charged me 3 times what the car was worth

Make sure you use that 30 day warranty. Other then that they really helped my family and I out when my bf lost his job.

Bought a car from them last month. Car is running great had to put in a new battery though. Experience thus far not bad.

They were knowledgeable and helpful. 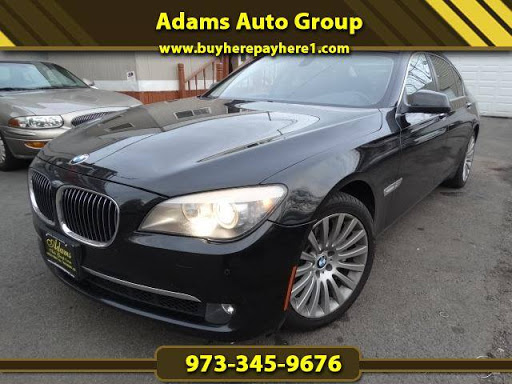